History And Heritage of -Medinipur

History And Heritage of -Medinipur

During third century AD a chieftain, named, PRANAKAR ruled the terrain kingdom of SHIKHAR BOOMI (now Singhbum of Jharkhand State).  His eldest son, MEDINIKAR moved southward and settled at this area.  His seat of rule was named after him as MEDINIPUR. 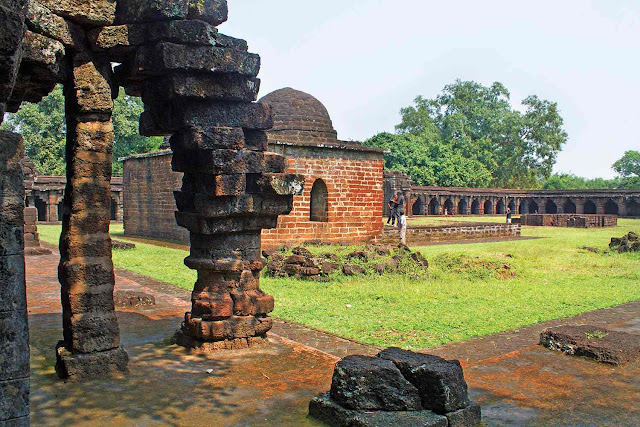 The climate follows a hot tropical monsoon weather pattern. Summers last from April to mid-June with diurnal highs ranging from the upper 30s°C to the mid 40s°C and lows in the low 30s°C. Daily heat is often followed by evening rains known as kalboishakhis or dust-storms (loo). Monsoon rains can last from mid-June to late August or even September with rains from the southeast monsoon contributing the lion's share of the annual rainfall of around 1500 mm. Winters last for 2 to 3 months and are mild; typical lows are from 8 °C – 14 °C. Allergies are common in winter and spring due to the high content of particulate dust in the air.

Soils near the Kangsabati River are alluvial with a high-degree of clay or sand, whereas soils towards Rangamati are lateritic. Vegetation includes eucalyptus and sal forests on the northwest side of town. The sal forests form part of the Dalma Hills, Bengal-Jharkhand Range. Arabari, the forest range which was the site of India's first Joint Forest Management scheme, is only 30 km away. Elephant attacks on humans are common in this area, although the town itself has never been attacked. Hordes of marauding elephants attacking human habitation in villages in Medinipur district have come as close to the town as Gurguripal, 6 km away.

A number of prehistoric sites of great interest[by whom?] are being excavated throughout the West Medinipur district. In ancient times the region seems to be highly influenced by Jainism and Buddhism. Coins issued by Samudragupta have been found in the near vicinity of the town. The kingdom of Shashanka and Harshavardhana also included part of undivided Medinipur in their kingdom. However, the most significant archaeological site in the region is the bustling port of Tamralipta near present-day Tamluk, a site noted in the travelogues of Faxian and Xuanzang. Later Chaitanya passed through the area on his way from Puri to Varanasi as documented in the Chaitanya Charitamrita. After the fall of last independent Hindu dynasty of Kalinga-Utkala, Gajapati Mukunda Deva in the 16th century, this region came under one of the five Sarkars of Mughalbandi Odisha i.e. Jaleswar Sarkar which was ruled by the Subehdar of Odisha. The north boundary of Jalshwar was Tamluk and south was Soro and Dhalbhumgarh in the west to the Bay of Bengal in the east. Bahadur Khan was the ruler of Jaleshwar Sarkar or Hijli (including Medinipur) during the time of Shah Jehan. He was defeated by Shah Shuja, the second son of Shah Jehan, then the subshdar of Bengal.

During the era of the Muslim rulers of Bengal nawab, Alivardi Khan's general Mir Jafar fought successfully against Mir Habib's lieutenant Sayyid Nur near Medinipur town in 1746. This was part of his campaign to regain Odisha and thwart the Maratha attacks on Bengal. Mir Habib came up from Balasore and was joined by the Marathas, but Mir Jafar fled to Burdwan, leaving Mir Habib to retake Medinipur with ease. Alivardi defeated Janoji Bhosle, a Maratha chieftain, in a severely contested battle near Burdwan in 1747 and Janoji fled to Medinipur. The Marathas held on to Odisha including Medinipur until 1749 when it was reconquered by Alivardi. The Marathas continued to raid Medinipur, which proved disastrous for the residents.

In 1756, Alivardi died and his successor was Siraj-ud-daulah. On 20 June 1757, he was betrayed by Mir Jafar to the East India Company under the command of Lord Robert Clive at Plassey. This consolidated the Company's hold on Bengal and Odisha (along with Medinipur). The district of Midnapore which included Dhalbhum or Ghatshila, now in Singhbhum, Jharkhand was annexed in 1760 along with Burdwan and Chittagong both handed over to the East India Company by Mir Qasim. The last free king of Dhalbhum was imprisoned in Midnapore town.

Some of the Malla kings of Mallabhum in the Bankura district held land in northern Medinipur district, while the Raj rules of Narajole, Jhargram, Lalgarh, Jamboni, and Chandrakona held sway in their local areas. The Raj rulers in Rajasthan would pay homage to Jagannath but carves out their own territories under the supremacy of the Hindu empires of Odisha.

Medinipur is notable for its contribution in the history of Indian freedom movement since it has produced many martyrs. During the British Raj, the city became a centre of revolutionary activities, such as the Santal Revolt (1766–1767) and the Chuar Revolt (1799). The Zilla School, now known as Midnapore Collegiate School was the birthplace of many extremist activities. Teachers like Hemchandra Kanungo inspired and guided the pupils to participate in the Indian Freedom Movement. Three British District Magistrates were assassinated in succession by the revolutionaries Bimal Dasgupta, Jyothi Jibon Ghosh, Pradyot Kumar Bhattacharya, Prabhakangsu Pal, Mrigan Dutta, Anath Bandhu Panja, Ramkrishna Roy, Braja Kishor Chakraborty, Nirmal Jibon Ghosh. Khudiram Bose and Satyendranath Basu were some of the young men that laid down their lives for the freedom of India. Kazi Nazrul Islam attended political meetings in Medinipur in the 1920s. Raja Narendra Lal Khan, ruler of Narajole, who donated his palace for Medinipur's first college for women, had been implicated, (although it turned out to be false) for planting a bomb.

Khudiram Bose was born in the Habibpur in 1889 and studied at Midnapore Collegiate School up to the eight standard. He was first caught by a policeman for distributing seditious leaflets in Medinipur in 1906. He was an anarchist and protested against the moderate policies of Surendranath Banerjea. Khudiram was sentenced to death for a failed attempt to kill Magistrate Kingsford. Satyendranath was executed on 21 November 1908. Noted freedom fighter and Bengal Province Congress Committee President Birendranath Sasmal practised at the Midnapore High Court.

It is the place Roy's popularly known as "Babu's of Jara " in Jara Ramjibonpur.This Roy Bahadur actual title "Gangyopadhyay or Ganguly" was an effective, powerful royal family during British Raj. Among them Sanatan Roy and many such like him freedom fighters got birth.This is also the maternal house of Sir Asutosh Mukherjee who is known as Bengal Tiger and Raja Rammohan Roy called "The Father of Modern India".The Bengali Film "Antony Firingii" by Uttam Kumar was shot in this palace and the story was also taken from this family. It is also famous for its Durga Puja.

Rishi Rajnarayan Basu, one-time tutor of Rabindranath Tagore, Asia's first Nobel Prize winner, was headmaster of the Zila School in 1850. He founded a girls' school, a night school for workers, and a public library. The Rajnarayan Basu Pathagar library is still in existence near Golkuar Chowk.

Not only Hindu activists, but also Muslim statesmen originated or spent time in Medinipur. Huseyn Shaheed Suhrawardy Second Chief Minister of Bengal during British Period, Prominent member of Awami league, a prominent political party in Bangladesh, and the fifth Prime Minister of Pakistan, hailed from a prominent family of Medinipur.

The Mallick Zamindars also ruled over an extensively large area during the British rule. They also built the Jagannath Temple of Midnapore. The Zamindari house declined after independence but the palace can still be seen at Mallick Chowk at Barabazaar. The palace also has a Durga manch in it and a Krishna temple in it. 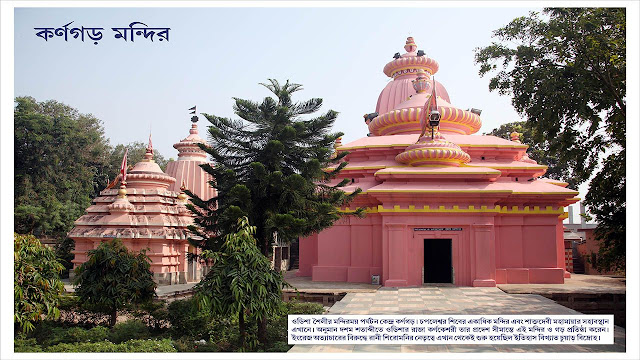 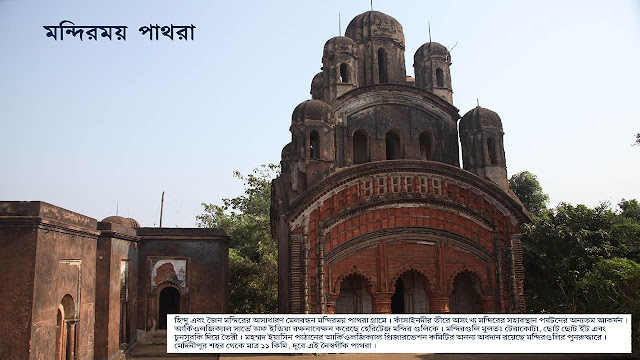 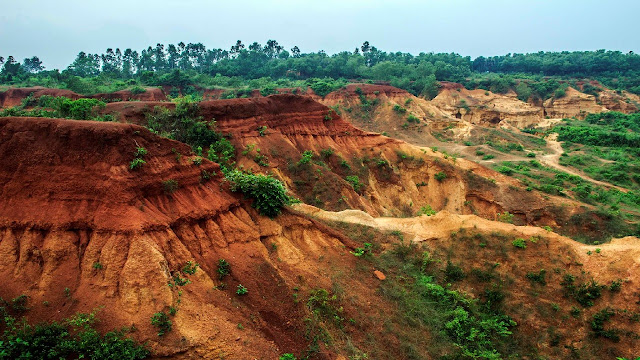 By Chandan Ghosh July 21, 2020
Pathra The village of tample Pathra, on the bank of the river Kangsabati, is a village of temples. There are 34 temples in the village, all over 200 years old. Barely 10 km from Midnapore town, this nondescript hamlet is a treasure trove for those who like to travel back in time. The history of Pathra goes back to the Gupta age, when the place was the hinterland of Tamralipta port, a gateway to southeast Asia. From 8th Century to 12th Century, it was an important hub for Hindus, Jains and Buddhists. A majestic Vishnu Lokeshwar statue dug out in the village in October 1961 revealed both Hindu and Buddhist influences, indicating that practitioners of both religions frequented Pathra. The turning point in the history of the village came in 1732, when Nawab Alivardi Khan appointed Bidyananda Ghoshal as the revenue collector of
1 comment
Read more